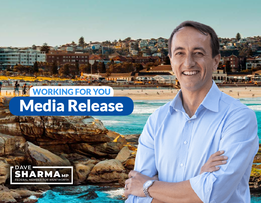 Liberal Member for Wentworth, Dave Sharma, said Wentworth had a shortage of playing grounds and sporting facilities that can be utilised by the whole community.

"Wentworth is home to the Eastern Suburbs Cricket Club, one of Australia's largest cricket clubs, with more than a thousand playing members," said Mr Sharma.

"Despite their strong membership growth, the Eastern Suburbs Cricket Club does not have any indoor cricket training facilities.

"Young people, especially girls, are getting increasingly interested in sports and leading more active lifestyles, and we want to encourage this.

"This new indoor cricket facility will be utilised by the Eastern Suburbs Cricket Club, accommodating training needs for more teams, but it can also be used by the whole community for other purposes.

"Only a strong local member, working with an effective government team, can deliver such critical upgrades for our community infrastructure."

Only the Morrison Government has a plan to continue delivering a strong economy and a stronger future for the residents of Wentworth.